It's not often that I'm negative about someone on this blog but I have to say I wasn't too happy to learn about an incident that occurred during the 2013 season.

Texas Rangers pitcher Tanner Scheppers was involved in an incident while on a road trip in Cleveland that resulted in him coming to the stadium during the series with a black eye. When asked he reported he had been sucker punched while out on a food run from the team hotel. He is quoted as saying Cleveland P.D. told him "...it happens a lot actually..." and didn't expect the culprits to ever be found.

In actuality after further investigation by the police of local Cleveland media Scheppers was out at a bar with Joe Nathan and AJ Pierzynski and began verbally instigating a group of bar patrons. Around 2:30 am Scheppers exited the bar and quickly lost a bar fight that he reportedly had plenty of opportunities to avoid.

I've posted autographs of celebrities I've run into while out and about while in Anaheim or Los Angeles so it's not surprising that I've seen baseball players away from the stadium also at restaurants, bars and other events. More often than not they're just normal guys who happen to have higher credit card limits. Occasionally I've run into guys who aren't the most considerate fellow patrons, because they happen to have higher credit card limits and are used to getting their way. I don't normally post those stories because it just is what it is.

Scheppers went out and instigated a fight that he apparently lost and lost very quickly. He then slandered the citizens of a city and made comments to the media that he expected the Cleveland police department to be complicit with. No. No, no, no.

Just because you're a baseball player doesn't mean you always get what you want or should get what you want. Expecting the incident to disappear and comments that made the national news circuit that disparaged the good people of Cleveland to have no follow up investigation is just silly.

You Tanner Scheppers got a black eye literally and figuratively in the press. You may throw a fastball, but you couldn't pull a fast one. 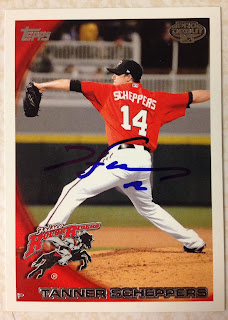 Scheppers signed this 2010 Topps Pro Debut card for Matt of MC's Autographs and he was nice enough to pass along the autographed card to me since he was able to get a duplicate signed. Much appreciated.
Posted by RJ at 3:26 PM