I've posted about my Justin Masterson collection that I've slowly been building and I made a big addition. 2013 has been a huge breakout year for Masterson with him being amongst the top of the AL Strikeout leaders and a strong record. He was named an All Star for the first time so I went ahead and got a Masterson All Star Game bp jersey. 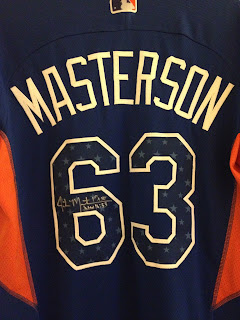 When the Indians came to town I was able to get this Justin Masterson autographed jersey on the numbers with a silver paint pen. He was kind enough to do a dual inscription "1st ASG" and then wrote the bible verse "John 16:33" I'm really happy with how it came out and it's one of my favorite autographs I've been able to get. Without a doubt Justin's one of the nicest and most accommodating signers in baseball whenever he gives out an autograph he really takes his time and knocks them out. He's always sure to give a consistent signature and almost always puts a verse when he signs. Seeing how he incorporated the All Star inscription into his normal signature was a really awesome touch. Justin Masterson's autograph is definitely one of my favorites.
Posted by RJ at 4:20 PM