It's always nice when you're able to get a stud's autograph and it's even nicer when that stud is more than just a player but a respected name within baseball. I was able to get former catcher and current coach Sandy Alomar Jr to sign.

Alomar Jr. was signed by the San Diego Padres as an amateur free agent in 1983. He was traded by the Padres after two short call ups and broke into the Majors with the Cleveland Indians in 1990. Immediately he made a name for himself playing for the Tribe for 10 seasons before becoming a journeyman playing for the White Sox, Rockies, Rangers, Dodgers and finally the Mets. He's a 6-time All-Star and won the 1990 AL Rookie of the Year. After his playing days were over he became a coach for the Indians as well as temporary manager after Manny Acta was fired, but was passed over for Terry Francona to be Acta's replacement. 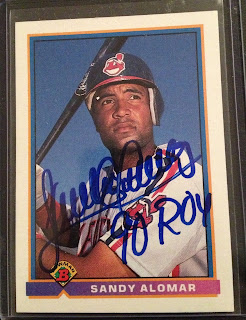 I was able to get Sandy Alomar Jr. to sign this 1991 Bowman card for me when the Indians were in town to play the Angels during the 2013 season. He was kind enough to inscribe "90 ROY" for me after I asked.
Posted by RJ at 10:00 AM