It's not a secret I'm a big UFC fan and that I'm a huge Ronda Rousey fan especially after going to UFC 157. Ronda Rousey's hot, an Olympic medalist, a UFC champion and a general badass there's too much to not like. After striking out at the UFC World Tour Los Angeles I decided I wanted to add a Ronda autograph especially before it became even more difficult to get one. With her being a coach on the 18th season of the Ultimate Fighter, fighting Miesha Tate as co-main event with Anderson Silva and Chris Wieddman and getting ready to film the Expendables 3 getting Rousey to sign will be even tougher. 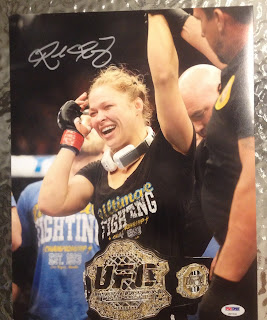