No not that Elvis. Texas Rangers shortstop Elvis Andrus.

Andrus was signed as an amateur free agent by the Atlanta Braves and was a key cog in the Mark Texiera trade that has paid huge dividends for the Rangers organization. Resulting in a franchise shortstop, two All Star pitchers (Matt Harrison and Neftali Feliz), and a catcher who is finally catching on with the Red Sox (Saltalamacchia) it's been one of the greatest trades in the franchise as it resulted in consecutive American League Championships. The 2-time All-Star has signed a huge multi-year extension to stay with the Rangers. He's already stolen more than 150 career bases and knocked 700 hits despite only being 24. It'll be interesting to see where his career numbers end up finishing since he broke into the MLB at age 20 and has years to go. 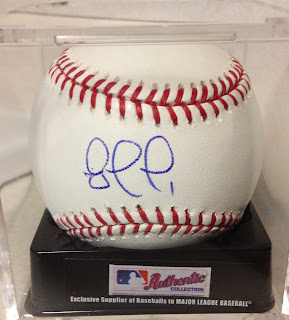 I was able to get this Elvis Andrus autographed baseball at Angel Stadium when the Rangers came to play during the 2013 season. I was excited to see Elvis nod when I asked if he'd sign especially when I saw him nod when I asked him to sweetspot the ball. I was less excited when I got the ball back and saw he gave me a super short version of his signature. If he didn't include his jersey number I'm not sure anyone would have any sort of idea who signed the ball.
Posted by RJ at 5:08 PM