I went to Temecula to go to the Grand Opening of UFC/MMA legend Dan Henderson's Gym. Hendo was scheduled to be there to celebrate the opening of the gym along with other MMA fighters including Tarec Saffiedine, Sam Smiley and referee Big John McCarthy.

I showed up to the event right when it was scheduled to start and there was a small crowd inside the gym. I walked in and right away spotted Dan Henderson greeting people as they walked in, taking photos and doing a few autographs. You can see Sam Smiley talking to people in his Team Carwin jersey from The Ultimate Fighter in the background. 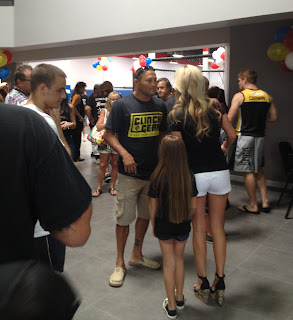 I pulled out my clipboard and got Hendo to sign for me. Dan Henderson autographed another copy of this photograph since I got one at the UFC 157 open workouts but it was in silver and didn't show too well when I tried to frame it. 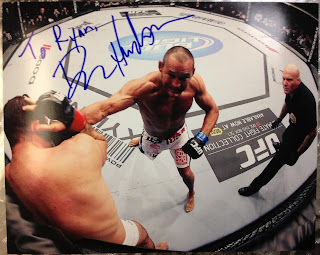 After he knocked out the first photo I had Dan Henderson autograph this photograph from UFC 157 of Henderson vs Lyoto Machida when he was co-main even with Ronda Rousey and Liz Carmouche. I told him I thought he got robbed in the decision and he said it was what it was and it couldn't change now. 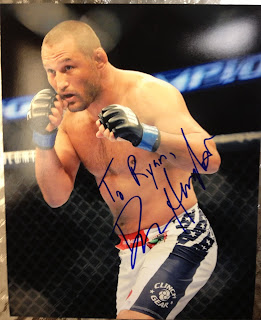 After Hendo signed for me we took a photo together and I decided that was a good day for me after I walked around taking photos of Henderson's championship belts and the gym. There is a full size octagon, plenty of floor space, plenty of punching bags, a separate wrestling mat area, free weights, various machines and a room for smaller classes in the gym. It looks like it's a great facility to learn MMA or BBJ that shouldn't have people on top of each other when they're working out and I hope Hendo's team there has a lot of success. 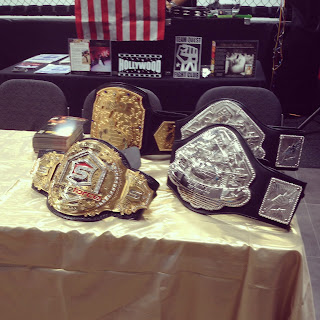 I looked for photos of the other fighters who were going to be at the gym and I spotted them all but couldn't find anything I really wanted to print out to get signed so I bought a shirt to support Hendo's gym and went home. I wish graphing could always be that easy and fun.

If you're interested in going there, Dan Henderson's gym address is 27901 Jefferson Ave. Temecula, CA and if you want to follow Dan Henderson's Twitter it's @danhendo.
Posted by RJ at 4:01 PM