Nathan spent years being an elite closer for the Minnesota Twins setting the franchise single season saves record at 47 and becoming the franchise all-time saves leader with 255 saves. Injury concerns ended his time with the Twins but he moved on to the Texas Rangers and regained his elite form. He's a 6-time All-Star, a member of the 300 Saves club and was the AL Rolaids Relief Man of the Year in 2009. 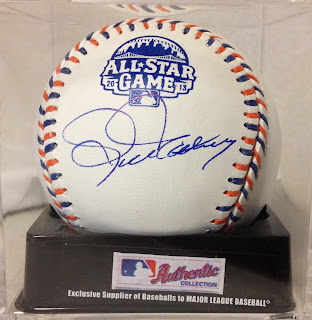 Nathan is definitely one of the Twins who listened to Harmon Killebrew when it comes to signing an autograph. Nathan has one of the nicest, cleanest signatures in the game much like fellow Twins product Michael Cuddyer. I'm very happy to have this Joe Nathan autographed 2013 All Star baseball in my collection, especially since he was the closing pitcher who got the Save for the game.

I'm curious to see when Joe hangs up his cleats since he's in the midst of one of his best seasons despite his age. He's moving rapidly up the all-time saves list and closing in on joining the top 10 list. A spot that wouldn't likely get challenged considering the volatility of modern day bullpens. 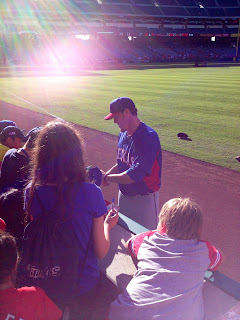 Here's a quick photo of Joe Nathan signing down the line after working out during batting practice. I got Joe Nathan's autograph at Angel Stadium when the Rangers came to town to play the Angels during the 2013 season.
Posted by RJ at 2:26 PM