Recently I was able to get the autograph of former All Star pitcher Scott Kazmir.

Kazmir was drafted 15th overall in the 2002 Draft by the New York Mets despite verbally committing to the Longhorns. He was traded to the Tampa Bay Devil Rays in 2004 and became a staff leader until he was traded to the Angels. After the trade his career fell apart and he dropped out of baseball until he worked his way back through independent ball and the minors to come back up with the Indians. He's been a 2-time All Star and was the 2007 AL Strikeout leader. 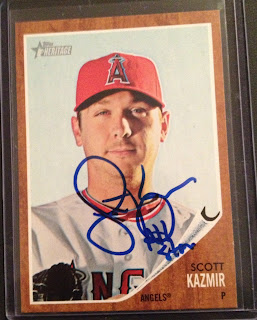 Scott Kazmir autographed this 2011 Topps Heritage card for me and was nice enough to inscribe "All Star" on it when I asked him to. To be honest I wasn't a huge Kazmir fan but seeing how he fought his way back into baseball to be part of the Indians resurgence makes me respect him a lot.
Posted by RJ at 7:21 PM